A little over 6 years ago, or just 2 posts below :), I wrote about how I use VIM from the command-line to invoke a GUI version of VIM, where each file would appear in a separate tab. I've stuck with that setup to this day, where VIM is still my main IDE whether working on Linux or macOS.

Recently I bought a pine64 based PINEBOOK Pro laptop which is powered by a low-cost ARM64 Single Board Computer (SBC). This came pre-installed with Manjaro KDE edition of Linux. Though this laptop is no slouch (I find myself using it more thanks to 8hrs+ battery), I wanted to keep it lean without loading too many GTK apps.

KDE, being built on Qt, I decided to try neovim-Qt, which is powered by neovim, a somewhat newer rewrite of VIM, that is pretty slick and fast. This is how I got neovim-Qt working in a similar manner to that of vim / gvim. 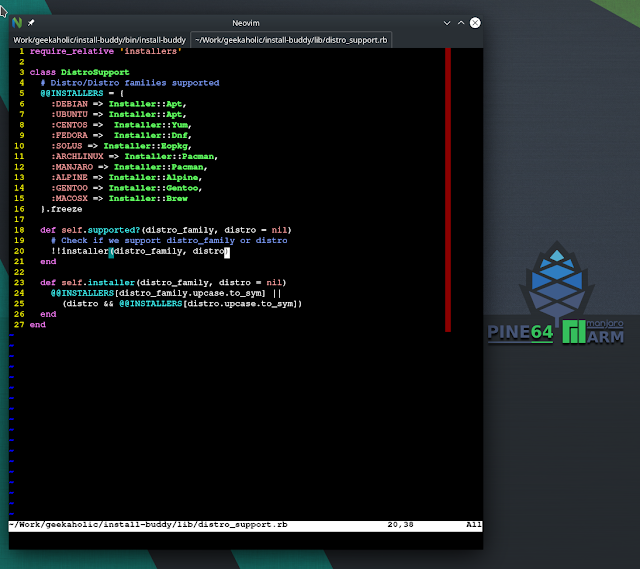 First, install neovim-qt. On Manjaro, this would involve pacman.

Next, the secret sauce ;), a project called neovim-remote. Fortunately, it can be installed quite easily via pip. But first I had to install pip.

This exposes a command nvr but because I use mvi with the VIM setup, I just aliased mvi to nvr so it behaves much like how I'm used to. I also had to add ~/.local/bin to my $PATH variable.

Finally, we need to start a neovim server so I added a shell script to do that as well.

Usage is simple enough. First I'd launch neovim-qt as a server using the shell script.

That's it! Checkout my ~/.nvimrc for how I've customized it.